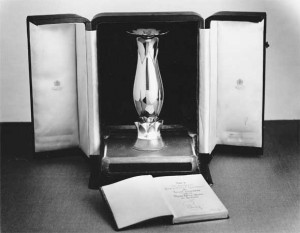 The Trophy is a little unusual as it comprises 2 parts firstly there is a silver trophy and rather than have the trophy engraved there is a book in which all of the winners are registered.  A second leather bound book has been produced to continue on the winning scripts words of wisdom. View all the winners at FFIA.

Nick and Janet Jerwood won the Coweslip Trophy back in 2003 when they sailed their boat ‘Spot the Difference’.  Janet and Nick had a short break from sailing the Flying Fifteen and returned a few years later with their new boat ‘Ineffable’. 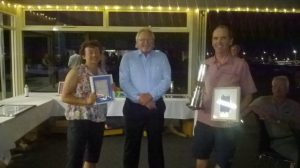