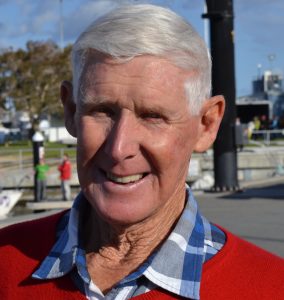 Graeme “Lillo” Lillingston
Graeme started sailing in the 1950’s and is still winning 60 years on. He has competed in many dinghy classes including VJ’s, Gwen 12’s, Moths, Lasers and of course Flying Fifteens
He started at the age of 10 being taught by his father although a little scared at times he persisted to become a champion in all the afore mentioned classes. He also had a go at Squash & Aussie Rules, but always came back to sailing.
He had a break from dinghies for a while sailing with his father on the family’s 42 foot yacht, but the lure of speed and planing brought him back to dinghies.
Lillo’s philosophy is that besides being boat on boat it is more importantly man on man and how you can outsmart the other guy, but you must always respect your opponent. He also believes that when he makes a mistake he must analyse the error and learn to perform better next time and don’t do it again. Boat handling is critical and time must be spent working with the crew to perfect every movement, as they say Practice makes Perfect.
He believes the rules are there for a purpose and if he thought he had not fully complied it would dwell on his mind and he would retire from the race. However, if he thought he was right he would be happy to attend a protest as it is a good place to learn the intricacies of the rules, over the years he has only been in “the room” half a dozen or so times in over 50 years of sailing. The introduction of alternative penalties from immediate retirement in the “olden days” has been a great improvement and reduced trips to the sin bin.
Lillo believes that physical fitness is important and if you are physically fit you are also more mentally alert, from which good results will often follow. In addition to personal preparation the boat needs to be properly maintained as this enhances your confidence.
You also need to stay focused to the extent lost hypnotising yourself blocking everything else out for the whole race.
In a race if he gets a good start he can “see” the race in front of him, he also analyses the other guys looking for weaknesses or perceived weaknesses and ways to exploit them.
For the best speed a Fifteen should be sailed flat.
Crews are important and enthusiasm is the prime requisite as if they have this the rest follows. There must a high level of communication in the boat and don’t dwell on a mistake.