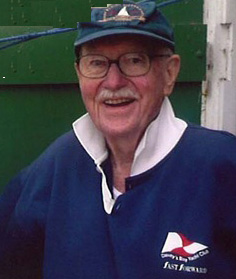 Nigel’s grandfather founded Davy’s Bay Yacht Club in 1909, so Nigel had been around boats all his life.

He sailed a variety of classes including Gwen 12’s prior to discovering the joys of Flying Fifteens. Nigel was a regular competitor at Club, National and World events.

He had two stints as President of FFIA and urged by the then Chief Measurer – Paul Altmann attempted to transform the class to a strict one design by tightening the hull tolerances to plus/minus 7mm compared to the 1” tolerances Uffa allowed to encourage amateur builders. Unfortunately, there was some optimising of hull shapes causing some competitors to regularly update their boats, thus making older boats obsolete.

BIFFA (now UKFFA) were not enthusiastic to change but Nigel & Paul persisted through both terms of office as FFIA President. Tony Wood who was President between Nigel’s terms continued the fight for change. Nigel went to the extent of making a video featuring some well known FFIA people promoting the change, which was sent to every club in the UK that sailed 15’s in the hope they would get the message!. These changes were entirely driven by FFIA and eventually the UK (who have always had the majority of voting rights) realised that it would be in the long term interest of the class to change the tolerances and at the same time standardise the keel and rudder profiles. Once these changes occurred our hulls have remained constant and we no longer need to update as frequently.

Nigel has left the class a longstanding legacy of a true One Design boat.