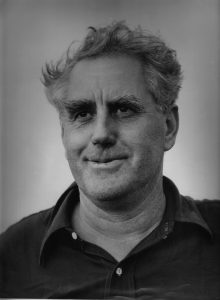 The design for the Flying Fifteen was conceived in the bathtub of Uffa Fox, an eccentric but brilliant yacht designer and builder who was born in 1898 and died in 1972.

Uffa (named after the Great Mercian King of East Anglia) described his bath time vision of a beautiful keel boat marching in triumph before a brisk “Nor Wester”? Whilst sitting in the bath, he quickly sketched the design on the back of a magazine which was close at hand.

Initially the yacht was known as the Dainty Duck design and the first prototype built in 1947 was named after his current girlfriend ‘My Dainty Duck’. Uffa was dissatisfied with the name of the design and the outline of a duck on the sail. One evening at home he was joined by two very happy friends for a joyful celebration. These two friends played a most enthusiastic piano duet which became more and more exciting and finished with a tremendous burst of powerful music. Uffa leapt to his feet and cried ‘fortissimo’ and so was conceived in a flash, the symbol ff which he enclosed in a Crescendo V. He went on to design many other flying yachts such as flying 10’s, flying 12’s, 20’s right up to flying 50’s, but Uffa is best remembered for his Flying Fifteen, which is numerically amongst the largest keel boat classes in the world.

The Editor of Seacraft magazine who Uffa nicknamed “Australian” sailed in the prototype Dainty Duck or Flying Fifteen, it gives an insight into Uffa and the wonderful boat he designed Read it Now!

There are many more interesting articles on Uffa Fox, who was one of yachting’s real characters. There is a web page where you can read up on this wonderful yachtie.