To celebrate the 75th year of the South of Perth Yacht Club, the inaugural Goolugatup Sailing Carnival was sailed in the first couple of weeks in January 2021. The Flying Fifteens competed in 10 races during the first week and the regatta continued with the Optimist State Championships and the Youth State Championships in the second week along with racing in a variety of skiff classes and foiling kite and sail boards.
A strong easterly to south-easterly system was well established prior to the regatta and made for some very demanding sailing for the first 3 days and highlighted a few areas needing additional maintenance in the boats and bodies. The front end of the fleet was dominated by Nick Jerwood and Brad Sheridan (Ineffable) who were rarely leading at the first mark but had worked their way to the front by the end of the first lap. Greg Tonnison and Mike Dunbar (The Answer)  were mostly hot on their heels and were often just a boatlength or two away from the gun. Even spinnaker colour came into question as The Answer changed to a red kite for the last day to get some more speed downhill.

Tuesday afternoon had the biggest breeze with gusts recorded up around the 30 knotmark that saw several retirements and a lot of defensive sailing. Most boats spent some time at awkward angles and even race leaders, Nick and Brad, found themselves perched on the gunwale waiting for the keel to dry !  They recovered for a hard fought win over Greg and Mike.

Thursday and Friday were much lighter but hotter with temperatures in the early 40’s. Even 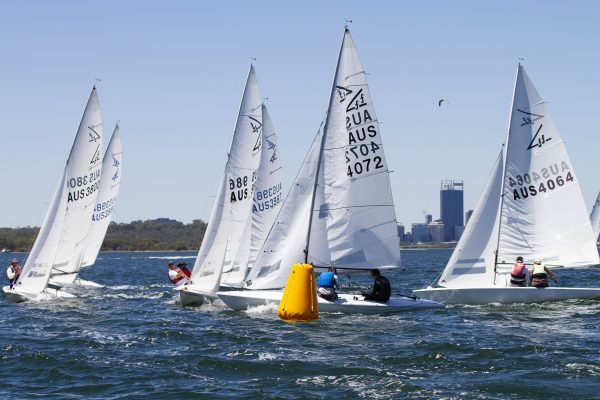 with the shiftier conditions and the racing being much tighter, Nick and Brad kept that winning feeling to finish the regatta with a perfect score. Greg and Mike were second and John Hassen and Kevin Griffiths (Final Fifteen says she)  third.

Our thanks to the Ron Tough Foundation for their sponsorship of the regatta and to the Rooke and Cooke show. John Rooke for his role as race officer and Rear Commodore Michael Cooke on who’s boat the flags were displayed. Also thanks to the army of volunteers who made it all happen on and off the water.